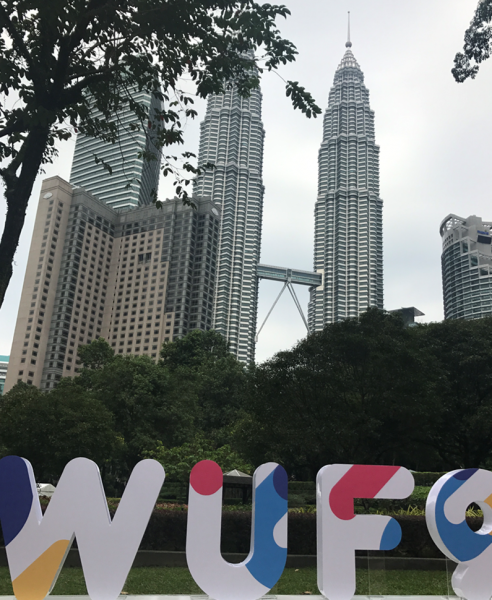 It rains often in Kuala Lumpur. As six o’clock in the evening ticks over to 6:01, a deluge falls from the sky like clockwork, soaking the ground and everything on it within seconds. But residents and tourists in the city center don’t need to worry much about shielding their smartphones or covering their shopping bags or even getting wet at all. Kuala Lumpur is ready for the downpour: its bustling city center is crisscrossed by tunnels and elevated walkways, a symbol of urban efficiency and innovation that fits in perfectly with the global conference that happened there last week, directly across from the famed Petronas Towers. During its run from February 7th to 13th, the ninth World Urban Forum gave its host country- and the civil society, private sector, and government representatives from the 165 countries attending- a chance to show the best of their cities, from infrastructural achievements like Kuala Lumpur’s skyways, to city-community partnership projects to improve informal settlements, to ambitious, cross-sectoral city strategies for implementing the New Urban Agenda and bringing forth a sustainable urban future. And IHC Global was in the middle of the action, hosting events, speaking on panels, and live-tweeting along the way. 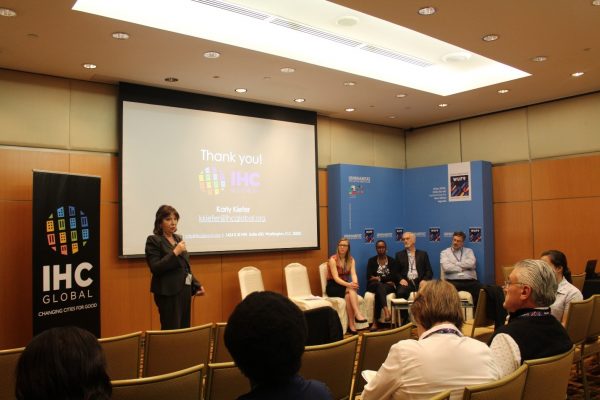 On the first full day of the conference, IHC Global had a chance to hold an informal meet and greet at the Next City World Stage, where members, partners and newcomers alike got to learn more about the IHC Global program and exchange schedules for the conference. IHC Global hosted three events during WUF9, each of which represents a significant portion of IHC Global programming for 2018. Kicking off the IHC Global presence was ‘From Theory to Reality: Using Data to Move the Bar on Property Rights for Women and the Most Vulnerable.’ The early morning session began with an introduction to IHC Global by President and CEO Judith Hermanson, followed by a presentation from Habitat for Humanity Bangladesh National Director John Armstrong of the organization’s project to map slums in and around Dhaka. Following Armstrong was the Global Land Alliance’s Senior Practice Manager for Urban and Environment Malcolm Childress, who presented the organization’s Global Property Rights Index, which measures a variety of property rights indicators, including possession of formal documentation and perception of tenure security, and gender differences within each. Adding a grassroots perspective was Frances Birungi of the Uganda Community Based Association for Women and Children Welfare (UCOBAC), who presented a project with Huairou Commission that works to empower communities in Uganda to develop their own data collection tools in order to build strong land laws and policies, especially for women. Rounding out the session was a presentation of IHC Global’s own recently completed project in Uganda, which aimed to collect data on women’s access to property rights in the country. IHC Global Director of Policy and Advocacy Karly Kiefer presented the project’s findings and key recommendations, including basic training in real estate and financial literacy programs for women. 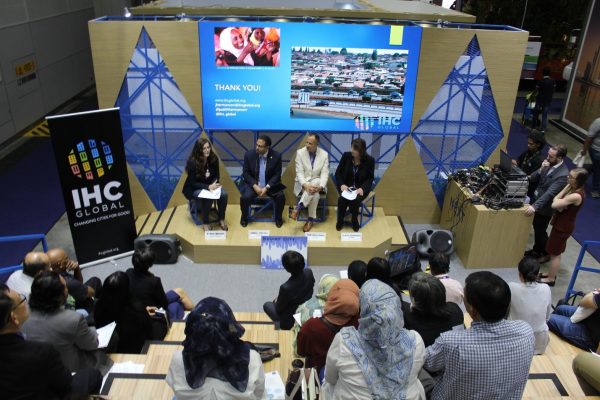 IHC Global’s next event, ‘Smart City. Just City.: Working Towards a New Paradigm,’ took place at the Next City World Stage. In front of a massive crowd, Hermanson unveiled IHC Global’s ‘Smart City. Just City’ initiative, which strives to bring a ‘smart city’ focus on data, technology, and efficiency together with the movement to increase inclusiveness and equity in cities. Hermanson and four panelists then had an in-depth discussion on the synergies between the ‘smart city’ and the ‘just city.’ Ahmed Eiweida of the World Bank brought the global economic power of smart cities to mind, stating a “competitive smart city will not be established without being an inclusive and sustainable smart city.” Next City President and CEO Tom Dallessio noted that achieving “sustainability” alone wasn’t enough and that the world shouldn’t use smart technology to go above and beyond sustainability. And Cityspace Architecture President Luisa Bravo brought the central concept of ‘Smart City. Just City.’ home, reminding the crowd of the importance of the human element of cities, and how crucial that input is to designing truly smart cities. Rounding out the discussion with a local government perspective was a special video by Baltimore Mayor Catherine Pugh, in which the Mayor highlighted the ways Baltimore is utilizing data to advance equity, such as by mapping inequality and gathering statistics on food security, police brutality and more. When the floor was opened to the audience, a similar line of thought ran through many of the questions asked: how can local people be encouraged to improve their own communities? The answer from the panelists was unanimous: Good governance, trust, follow-through on promises, and so much more.After the launch event, Hermanson was also featured on Next City’s podcast, discussing in more detail the connections between the Smart City and Just City. 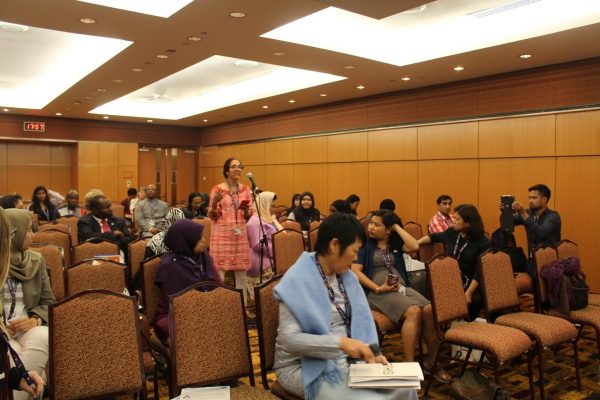 IHC Global’s final hosted session was ‘No Time to Waste: Housing Policy and Advancing the New Urban Agenda,’ a discussion surrounding the IHC Global policy paper, which served as a follow-up to the review that occurred at the Habitat III conference. Hermanson began the session with a brief overview of the paper, focusing on the two main lessons: (1) Housing policy matters, but not all policies or programs are equally alike, and (2) It is about building cities, not just houses.This belief in an integrated urban approach was clear as the panelists- Hermanson, William Cobbett of Cities Alliance and Steve Weir of Habitat for Humanity International- moved into a discussion moderated by IHC Global Senior Technical Advisor Roger Williams. Cobbett spoke on how fundamental it is that housing is integrated into city planning from the start, to prevent the creation of more communities and neighborhoods that are cut off from and less cared for than the rest of the city. Steve Weir explained the pieces of the housing puzzle that need to be brought together for policies to work, including adequate space for planning, infrastructure, and secure tenure. And Hermanson noted that the capacity of governments to respond to their citizens’ needs, government accountability, and data transparency are all key hurdles to jump over for good governance when it comes to housing.

The IHC Global team also had the privilege of speaking at several events throughout the conference. IHC Global Communications Officer Rebekah Revello kicked off the week in Kuala Lumpur, speaking on a panel during the UN Children and Youth Assembly discussing urban climate resilience. Moderated by Maruxa Cadama, an Urban Advisor for Cities Alliance, and featuring three speakers from a variety of urban disciplines, the session included discussion from panelists on their countries’ and organizations’ roles and priorities in achieving urban climate resilience, covering a range of topics from asymmetrical disaster response to climate education. Revello discussed the roll-out of the new IHC Global initiative, “Smart City. Just City.,” and noted the important role that smart city data and technology play in creating climate resilient cities, specifically mentioning urban data projects that have measured density, transportation, and infrastructure in relation to climate risks. IHC Global also had the pleasure to participate in FIABCI’s networking event, ‘The Affordability of the Metropolis: Turning Density into Prosperity,’where President and CEO Judith Hermanson spoke about how important it is to extend property rights to the most vulnerable populations, including women who are often disenfranchised, in order for cities to develop and prosper. Hermanson also spoke at the University of Chicago Mansueto Institute for Urban Innovation’s networking event, ‘Data Informed Inclusion and Empowerment: Slums and Informal Settlements,’ where she referred to the ‘Smart City. Just City.’ initiative and highlighted the key role that smart city technology and data-mapping will play in upgrading slums and making affordable housing in cities more accessible, as well as the importance of the presence of the local community in decision making, in order to achieve an integrated urban approach. 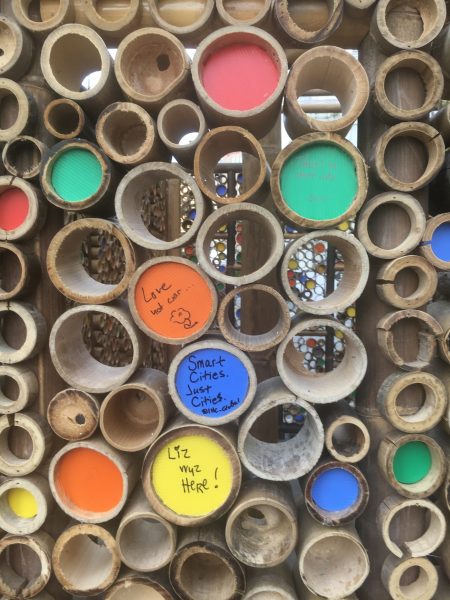 Outside of our direct participation, IHC Global attended the events and meetings of a range of our members and partners, including the General Assembly of Partners, Habitat for Humanity International, International County/City Management Association, the World Urban Campaign, USAID, the Ford Foundation and more. From local and national governments to civil society to private sector organizations, the commitment IHC Global saw to the continued implementation of the New Urban Agenda was inspiring, and the new and innovative ideas that took root in Kuala Lumpur represent an urban community that is already thinking outside the box and is a million light years ahead. We look forward to advancing our new initiatives and actively participating in the policy dialogues that go above and beyond the implementation of the New Urban Agenda and the Sustainable Development Goals. 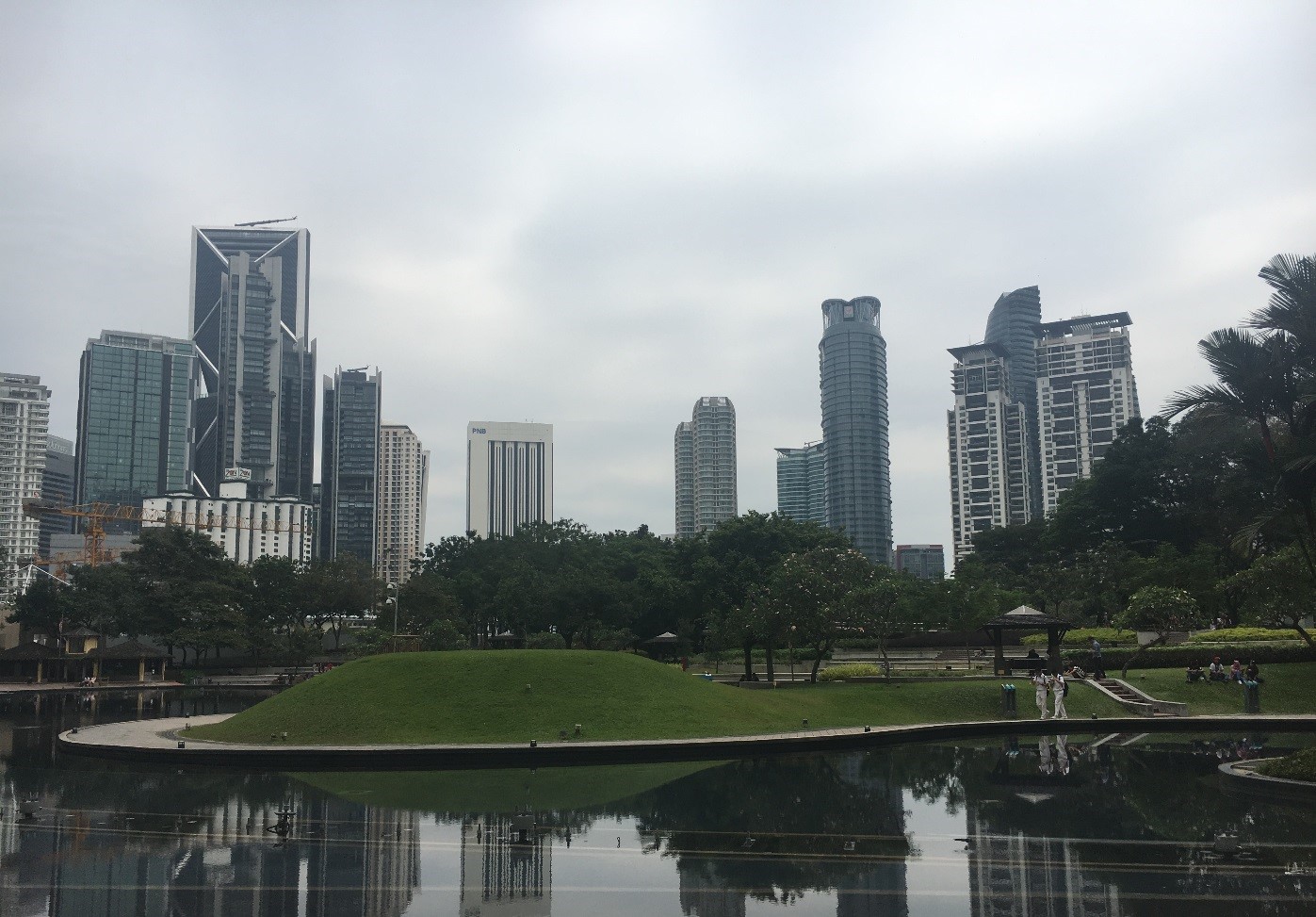 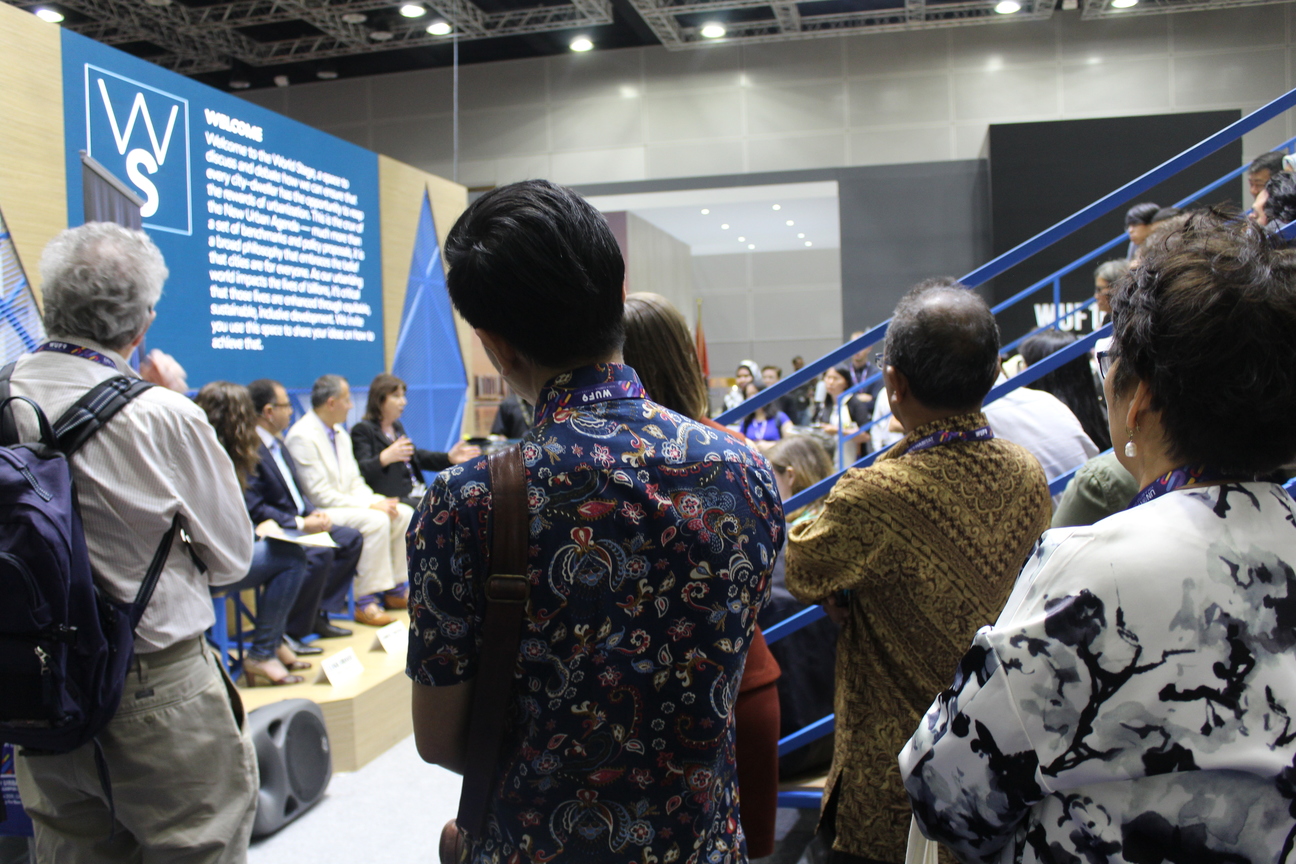