In 2010 the UN declared water and sanitation as a human right, fundamental to human development and well-being.  Access to clean water and improved sanitation is also critical to the achievement of other development objectives such as adequate nutrition, gender equality, education and the eradication of poverty.

Who Is At Risk?

The figure below shows how much access to improved sanitation and water supply depends on income levels, with the poorest being substantially more deprived than those better off.

Figure 1 (below) shows sanitation and drinking water coverage for each wealth quintile in urban areas of 65 developing countries. Each country is represented by a vertical set of five dots arranged according to average coverage. The vertical spread of the dots shows the extent to which coverage varies between the richest and the poorest quintiles in each country. The gap between the richest and the poorest quintiles is most pronounced in access to improved sanitation. 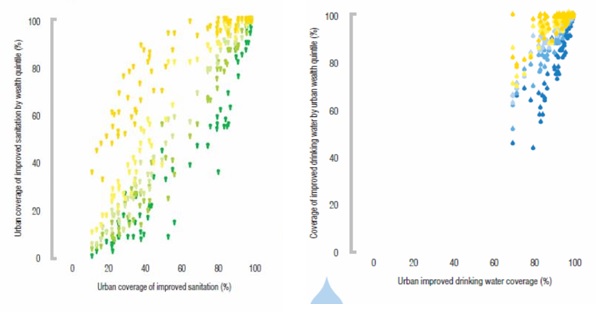 Source: WHO and UNICEF: Progress on Sanitation and Drinking Water — 2015 update and MDG Assessment

What is at Stake?  Why WASH for the Urban Poor Matters

In densely populated slums, unclean water poses serious health risks. The risks associated with unclean water have detrimental effects not only on health, but also more broadly on education and employment. Furthermore, without proper sanitation, already-vulnerable populations are left more susceptible to pollution and contamination of available water sources. According to Water AID, an NGO, “water and sanitation services are recognized…as the single development intervention that brings the greatest public health returns and environmental benefits in urban development.”

Families in better off urban neighborhoods in much of the developing world (with some major exceptions) consume the WHO recommended 50 litres per person per day while poorer families struggle to access such quantities.  Continuity of public supply in poorer neighborhoods is a serious problem, forcing many families to rely on private sources where quality is suspect, costs higher and availability sporadic.  About 50% of urban dwellers in Sub-Saharan Africa get their water from small suppliers where costs can be anywhere from 5 to 15 times higher than from piped public sources.  (Water AID, 2016, Water at What Cost, op.cit.)  (http://www.wat
eraid.org/news/news/water-at-what-cost-our-latest-report-reveals-the-state-of-the-worlds-water

Why Invest in WASH for the Urban Poor?

The economic and social benefits of clean water and sanitation are huge. According to the UNDP, the return on every US dollar invested in water and sanitation is more than US$ 5 in Sub-Saharan Africa and South Asia, more than US$ 10 in the Arab States and East Asia, and more than US$ 35 in Latin America due to increased productivity and reduced burden of health care. (International Policy Centre for Inclusive Growth (IPC), Working Paper No. 57, 2009 op.cit.) The UNDP estimates that for every $1 invested in sanitation at least $9 is returned.

Lack of sanitation also holds back economic growth.  According to the World bank poor sanitation cost billions to some countries, amounting to the equivalent of 6.3% of GDP in Bangladesh, 6.4% of GDP in India, 7.2% of GDP in Cambodia, 2.4% of GDP in Niger, and 3.9% of GDP in Pakistan annually. (http://www.worldbank.org/en/topic/sanitation/overview#1)

When?  SDG time frame for universal access to water and sanitation is 2030.

Sustainable Development Goal (SDG) 6 is to ensure availability and sustainable management of water and sanitation for all by 2030.  Four of the targets relate to urban WASH:  (6.1) by 2030, achieve universal and equitable access to safe and affordable drinking water for all;  (6.2) by 2030, achieve access to adequate and equitable sanitation and hygiene for all and end open defecation, paying special attention to the needs of women and girls and those in vulnerable situations;  (6.3)  by 2030, improve water quality by reducing pollution, eliminating dumping and minimizing release of hazardous chemicals and materials, halving the proportion of untreated wastewater and substantially increasing recycling and safe reuse globally and (6.4) by 2030, substantially increase water-use efficiency across all sectors and ensure sustainable withdrawals and supply of freshwater to address water scarcity and substantially reduce the number of people suffering from water scarcity.  In addition, Target 1 of SDG 11, “Make Cities and Human Settlements Inclusive, Safe, Resilient and Sustainable aims by 2030 to ensure access for all to adequate, safe and affordable housing and basic services and upgrade slums.

While the aspirational goal is to provide an on-plot water supply for every household and a toilet with safe management for fecal waste, for the poor in developing countries a more realistic goal is to provide basic services to all  — basic water supply means a water source within a 30 minute round trip, basic sanitation means an improved toilet and basic hygiene means a having a washing station with soap and water for all households.

Where Resources Should be Channeled

The 2014 GLAAS report (UN Water:  Global Analysis and Assessment of Sanitation and Drinking Water)  http://www.who.int/water_sanitation_health/publications/glaas_report_2014/en/)indicated that although rural areas have significantly higher WASH gaps than do cities and towns in the developing world, many countries and donors prioritize urban WASH spending over rural. Yet this urban preference is understandable and should be sustained in that almost all population growth in the coming decades will be in urban centers and providing WASH in urban areas is generally more costly and “messier” while servicing rural areas with basic solutions is easier.  Water Aid notes however that 60% of that growth in developing countries will take place in slums.   To achieve SDG goal of universal WASH coverage, the World Bank estimates that urban areas will require 70% of the total required capital expenditures due to population growth and advocates countries and donors shifting greater the focus to the poor and marginalized. (http://www.worldbank.org/en/topic/water/publication/the-costs-of-meeting-the-2030-sustainable-development-goal-targets-on-drinking-water-sanitation-and-hygiene. )

Resources also need to be shifted to sanitation where the service gaps are the greatest.  While the gaps in sanitation are more acute, the proportion of aid commitments for sanitation shrunk from 1/3 to ¼ of total WASH commitments from 2010 to 2012.   Water AID suggests that urban centers will account for 2/3 of the water and sanitation coverage gaps over the next decade, in 2009 they accounted for 30% of the gaps.  Since 60% of urban growth in developing countries is estimated to be in be in slums and informal settlements, WASH shortfalls will be more acute in these poorest areas.  (Water AID: Turning Slums Around: The Case for Water and Sanitation , op.cit.)    Notwithstanding the WASH gaps of the rural poor, poor urban areas will continue to require greater priority if the SDGs are to be met.

How to Reach the Goal

Financing the water and sanitation gap for the urban poor to achieve the SDG targets will require herculean efforts from developing countries, the international donor community, the private sector, non-governmental organizations and the residents themselves.   Based on past experience with the MDGs, the picture is not encouraging.  WHO estimates the likely costs of achieving universal access to WASH by 2030 is close US $50 billion per year accounting for increased population. http://www.unwater.org/fileadmin/user_upload/unwater_new/docs/UN-Water%20MOI%20compilation_15%20July%202015.pdf (Exec Summary p. 1).

The World Bank suggests this is three times current investment levels. The 2014 GLAAS report  found that 80% of reporting countries fall short of meeting financial requirements to meet the SDG targets.  (The Costs of Meeting the 2030 SDG Targets on Drinking Water Sanitation and Hygiene (2016)   Water Aid has suggested that African countries should spend 4.5 per cent of GDP on water and sanitation yet according to Development Finance International and Oxfam, in 2014 just 10% of countries met WASH targets, spending averaged less than 1% of GDP and a majority of countries have actually recently reduced spending on WASH as a percentage of GDP.  (http://www.oxfam.org/en/research/financing-sustainable-development-goals)

Cities in the developing world rely on three major sources of finance for WASH: tariffs, taxes and transfers from international donors and charitable foundations.   The 2014 GLAAS report found that while household contributions are significant, 2/3 of reporting countries indicated government and external finance comprise over 50% of WASH expenditures.

Role of the Global Community

The international community has been stepping up its support for WASH, increasing its commitments by 30% from 2010 to 2012 to over $ 15 billion (including ODA of $10. billion and non-concessional loans of $3.6 billion).  This represents an increase in the proportion of development aid for WASH from 4.7% to 6.1% from 2010 to 2012 and almost a doubling of the proportion since 2002.  The United States has stepped up its efforts since the passage of the Paul Simon Water for the Poor Act of 2005, ramping up annual funding to $300-400 million in recent years.  External assistance is also increasingly being targeted to the poorest regions although evidence suggests that the poorest countries with the highest WASH gaps (mostly in sub-Saharan Africa) are still relatively disfavored.    (Investing in Water and Sanitation: Increasing Access, Reducing Inequalities, UN Water Global Analysis and Assessment of Sanitation and Drinking Water 2014) (GLASS Report).

International aid for WASH and national investments have tended favor large scale water and sanitation schemes in urban areas, usually excluding the urban poor and only upgrading existing conditions.  The World Bank is the largest source of development finance for WASH in Sub-Saharan Africa but a 2012 Water Aid Discussion Paper on three urban projects (Ouagadougou, Accra and Dar es Salaam) found that a disproportionate of the IDA financing ended up serving the better off communities because greater emphasis was placed on the financial viability and technical capacity of the service provider and not on the requirements of the poorest and neediest. (Water Aid 2009, Timeyin Uwejamomere and Henry Northover: Are World Bank Investments Benefiting the Urban Poor?) (http://www.wateraid.org/google-search?query=World+bank+Investments.)

Despite recent increased attention to WASH, meeting SDG targets for WASH in low income urban areas of the developing world will require an even stronger commitment from governments to bring together coalitions of the public, private (including philanthropic) and non-governmental sectors and the international community around a sound WASH plan that targets those most in need living in the burgeoning slums and informal peri-urban areas.